Jordan Graham has said the squad need to give a top six chase everything they've got as the business end of the season gathers pace.

Jordan Graham is keen to shake off the disappointment of being pegged back by Doncaster Rovers, after a dream start saw the Gills two ahead with barely four minutes on the clock. The tricky winger is now calling on his teammates to extract the positives and bounce back against Hull.

The Gills looked to be heading for a third straight win, with Graham netting after two minutes and in-form striker Vadaine Oliver adding another two minutes after that. Donny, however, hit back with two first-half strikes of their own, and despite Gillingham taking the attacking initiative in the second period, the game ended all square. 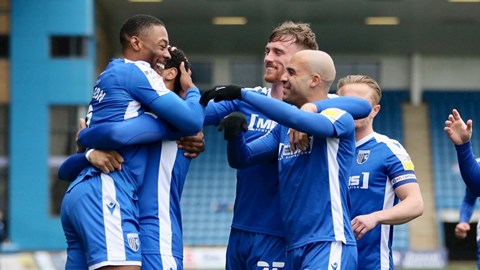 Following the 2-2 draw, Graham said: “It’s frustrating because we started the game so well. Our two quick goals were all that we could have asked for.

“We have to be positive and look at it as a good performance. We can’t be too hard on ourselves, we have to try and keep the momentum going into next weekend.

“We can’t be too down on ourselves as we have had a good run recently. We have given ourselves a great chance of getting into the play-offs. We have got to look at it as a point gained and take it into next week.

“We had a dominant second half but we couldn’t quite get the winner that we needed but it is good that we are now in a place where we are upset that we haven’t beaten Doncaster, who are a very good team.

“We will bounce back and hopefully get three points on the road next week against Hull.

“As a group, we said about three weeks ago, ‘let’s not let this season die out on us, let’s at least give it a go’. We have another point on the board and we are only two points off the play-offs, so we are still in with a chance.

“We don’t want our season to die out and we don’t want to be here playing games for the sake of it. We have a tough couple of weeks coming up; away to Hull and then we have Blackpool. There are some hard fixtures ahead, but we back ourselves. We have a good group with a good spirit and, fingers crossed, we can have a right go at the end of the season.”