Gills midfielder Stuart O’Keefe says the squad are now getting their rewards following a string of excellent displays which has seen Steve Evans' side enter the play-off places in Sky Bet League 1.

Vadaine Oliver's 17th goal of the season earned Gills a 1-0 over Wigan on Wednesday, in a game O'Keefe was awarded man of the match in what was a tough and physical game for the hosts. 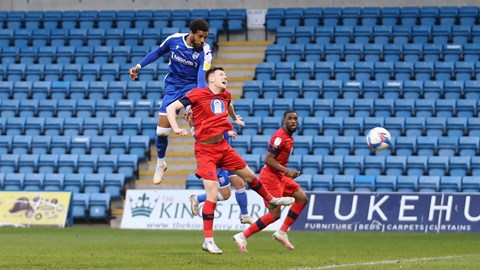 The former Premier League midfielder was full of praise for his teammates and acknowledges how consistent the squad’s performances have been.

He said: “The last seven or eight weeks the boys have been excellent. We’ve built up that momentum and managed to win points and be hard to beat.”

“We’re now seeing the rewards with the table looking as it is.”

Oliver was on the score sheet and grabbed his eighth goal in the month of March. His goals have helped inspire Gills in their fine recent run of form.

O’Keefe knows how crucial the striker has been for Gillingham and hailed Oliver’s importance in the team.

He said: “He’s a big player for us, a pivotal player. He’s getting his rewards for his hard work by getting his goals.

“It was an excellent cross from Jacko [Ryan Jackson], and if you give the big man crosses like that, he will give you goals.

“We did ride our luck at times, but we took our big chance, and they didn’t.

“Once we got the goal, I thought we saw the game out very well. It was very professional, and everyone put their bodies on the line. You could see how much it meant to everyone to hold on and get into that top six.”