Whitstable strike late at the Belmont to knock out Gills in cup semi-final.

A late goal from Tom Carlton denied Gills the chance of a place in the Final of the Kent Senior Cup.

Gillingham, made up mainly of youth team players, competed well from start to finish, enjoyed a lot of possession and had opportunities to go in front, and perhaps win, but Whitstable struck late to win 1-0 and set up a competition finale with Dartford.

Ronald Sithole and George Hutcheon were among the options from the bench.

Gills nearly took the lead within the opening 90 seconds when Gerald Sithole latched onto a cross from the right; on the stretch he made contact at the back post but guided his effort inches wide of the woodwork.

The visitors certainly looked the most comfortable in the early exchanges and the comparatively younger defence seemed more than up for the physical challenge.

Gbode worked his way into a good position just inside the box, but a heavy touch allowed Danny Walder to intercept and concede a corner which was cleared at the near post.

Gills commanded possession in the early exchanges and their next chance fell on 18 minutes when MacArthur’s left footed cross was well caught by Dan Eason, following an initial throw from Akehurst.

The hosts grew into the game and progressively asked more questions of the Gills defensive line, however very rarely was Crump troubled. He made a comfortable stop from Luke Griffiths with Freddie Carter having earlier made an excellent last ditch tackle to prevent the keeper needing to make a save.

On 37 minutes Sithole worked his magic again on the left wing, using his pace and clever foot work to make a yard of space on the edge of the box. He went for goal but sent a right footed effort just over the bar.

Two minutes later and Whitstable should perhaps have taken the lead. Tom Carlton had halted his run towards the right side of the penalty area, saved a couple of yards of space and used it to his advantage when the ball made its way to him. He took a touch before powering an effort against the underside of the bar before Gills cleared.

Whitstable tried their luck early in the second half with Danny Walder’s effort from range just clearing the right hand post. Gbode went even closer at the other end when his shot struck the outside of the woodwork with Daniel Eason caught by surprise.

On 54 minutes Gills came within inches of taking the lead when an effort from Carter was deflected inches past the left post. The resulting corner, taken by MacArthur, was headed clear.

A few minutes later Sithole, who switched to the right wing, took on his man and went for goal. His left footed strike was deflected for a corner which was cleared.

Just beyond the hour, Lintott very nearly broke the deadlock. Akehurst’s pacey free-kick caused confusion in the box, Whitstable were unable to clear and Lintott struck the bar with a close range shot.

Harry Goodger had a good chance on 67 minutes, connecting with a cross from the right side which was guided just wide of the target.

With less than ten minutes to go Ronald Sithole, on for MacArthur, went incredibly close when he cut in from the left hand side and aimed an effort towards the far post. It took a crucial deflection, resulting in a corner, which was well defended.

Tom Carlton and Ronald Sithole saw chances come and go as penalties loomed at the Belmont, however in the first minute of stoppage time Carlton, from the right hand side of the penalty area, placed an effort across Crump and into the bottom corner to win the tie. 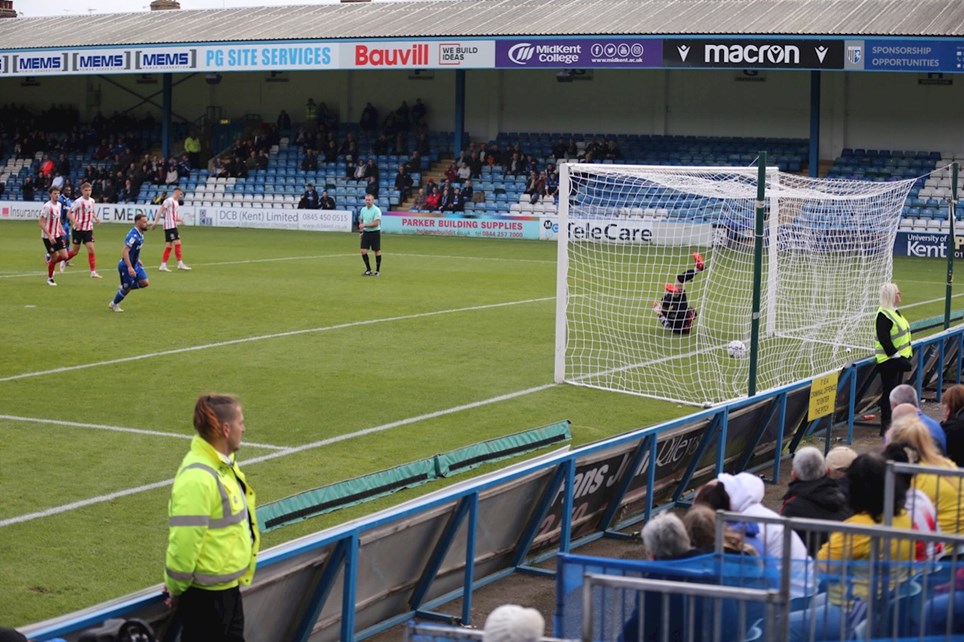 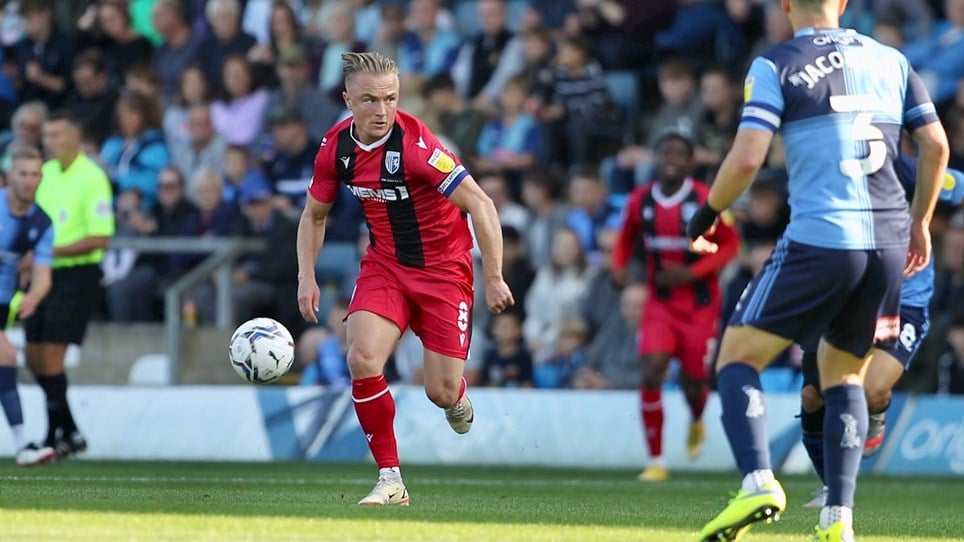 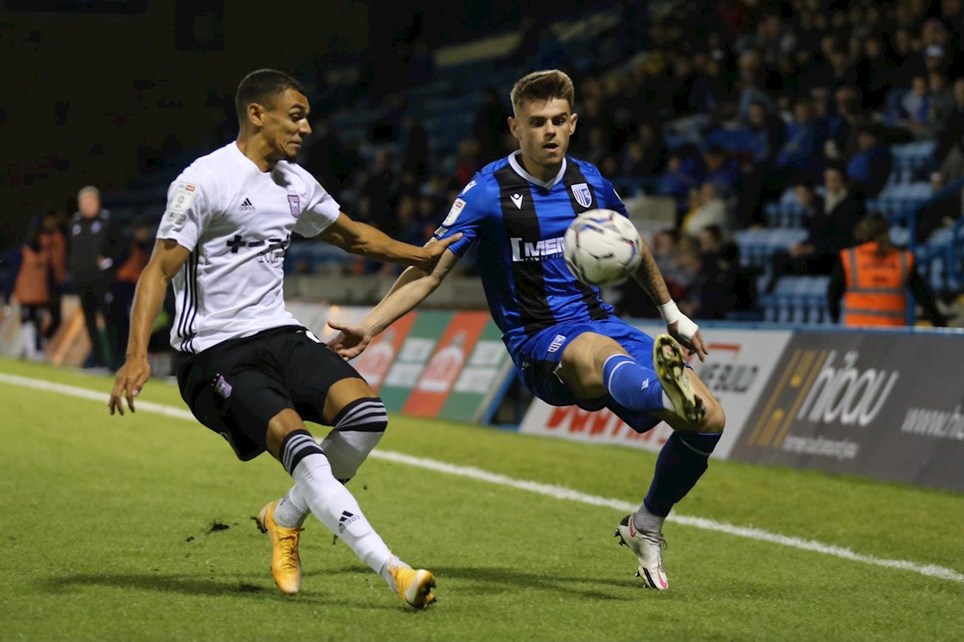 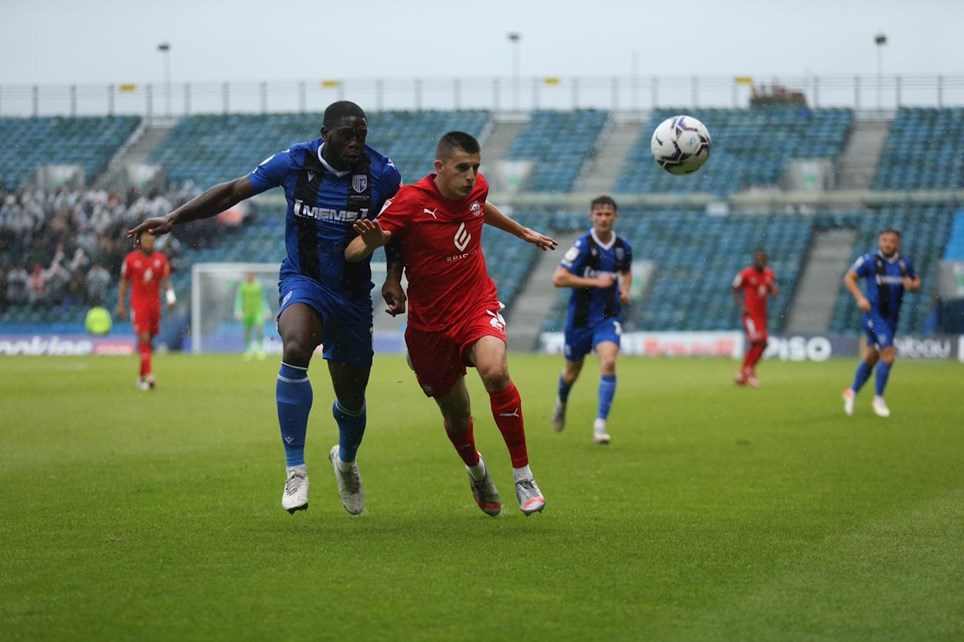 
Gills concede twice in the second half as Wigan take all three points from ME7.