Neil Harris delivers his reaction following Gills 1-0 defeat at the Stadium of Light.

Gills boss Neil Harris was left bitterly disappointed for his team, and the club’s travelling fans, as Sunderland netted in the dying seconds at the Stadium of Light on Saturday to snatch all three points in a 1-0 win.

Harris knew just how difficult of a task Sunderland would pose to his side, but he was left frustrated as to how the winning goal was created and scored. 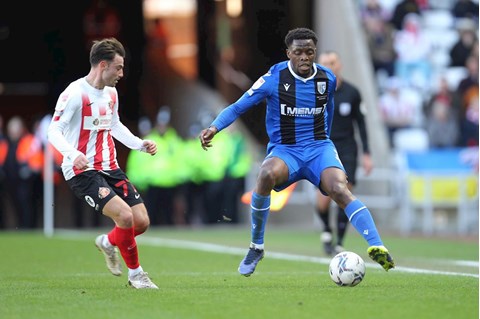 Speaking after the game he said: “I knew it was going to be a difficult game today. I knew that it was probably going to be our toughest challenge between now and the end of the season.

“Obviously, it’s tough to take when you concede last minute, but it was an avoidable goal for me.

“They caused us all sorts of problems early on, but we managed to adjust. I thought that at times, we were comfortable. We may have not always been a threat ourselves because it’s tough.”

After the match, Harris had the chance to give his young squad an important message. With the goal coming so late, he reiterated the point of staying switched on until the referee blows his whistle for the final time.

“You can’t switch off for a moment because you’ll get punished against good players. That’s what Sunderland did today.”

Academy product Josh Chambers made his full league debut at the Stadium of Light. After injuries to other midfielders, Harris had enough faith to give the teenager his first professional start.

Harris was delighted to see the youngster get his chance at one of the biggest clubs in the division.

“I was delighted for Josh,” he said. “I didn’t tell him until just before midday that he was playing because I didn’t want him to be thinking too much about it.

“I thought that Josh was exceptional in his attitude. He’s got real personality and character. That’s why I played him.”