Gillingham Manager Neil Harris says his team will be ready as Fleetwood prepare to make the long journey to ME7 for a crunch fixture at the bottom end of the League 1 table.

Gills manager Neil Harris was happy with the point his side picked up against Cheltenham Town in the 2-2 draw at the Johnny-Rocks Stadium on Good Friday, but quickly turned his focus to Monday's visit of Fleetwood.

Harris was happy with the way that his team performed and was left smiling from how they scored their goals. However, he quickly turned his attentions to the visit of the Cod Army who are just below Gills in the table.

“I think it’s a fair reflection on the balance of the play and chances at both ends," Neil said.

"Aaron’s made a couple of really good saves for us.

“We’ve scored two good goals and hit the underside of the bar and post in added time. There’s an element of disappointment, but then you get back into the changing room and begin to concentrate on Monday.”

Vadaine Oliver put Gillingham in front during the first-half before Cheltenham equalised before half-time. Then just short of the hour, Ben Reeves scored a great goal to regain the lead.

Harris had to decide on whether to start the midfielder following his second-half showing in the draw against Wycombe. He was delighted for Reeves, who was able to show off the class he does possess.

“I played Ben Reeves because I thought that he deserved to off the back of the game against Wycombe. He’s been building up minutes, but we knew that he wouldn’t go past an hour to 70 minutes today.

“He showed his quality today. He just needs that one moment, and he can deliver a finish like that.”

It was a physical game in which the Gills were putting their bodies on the line for the cause. Olly Lee and Reeves both had to come off due to slight knocks in the second half, and others were battered and bruised.

With there being such a quick turnaround before Fleetwood, Harris is keen to have the squad in over the Easter weekend to ensure he knows what he will have available to him for the crucial fixture.

“The medical department will be busy, and we’re in all weekend. Sometimes you’re best leaving players at home for a day, but when you’ve got a quick turnaround like this you need your eyes on the players.

“We will do a head count in the morning, and there will be a player or two that won’t be with us Monday.”

Monday will see a packed MEMS Priestfield Stadium in what will prove to be a vital match in the club’s aim for survival from relegation.

The 44-year-old delivered a message to the supporters that will be in the ground for the huge game against Fleetwood. 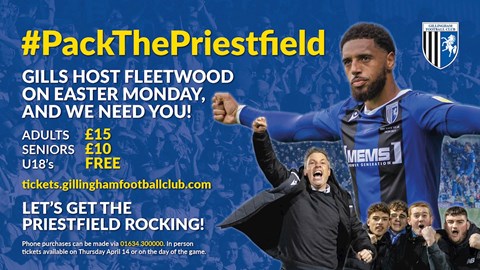 PACK THE PRIESTFIELD FOR FLEETWOOD GAME

“My players will be ready, and that’s the importance of it. They’ll have a calm manager that picks the team, and hopefully, the right team and the right tactics and formation to play against Fleetwood.”

Stuart O’Keefe missed the game against Cheltenham and is an injury doubt for the game on Monday against Fleetwood.

However, the club captain still travelled to the game to be around the squad, and Harris was full of praise for his skipper, who provides the leadership and guidance that his young squad needs.

“He wanted to travel, and the boys need him," the manager added. "We have some senior players, but we have a lot of young players with a lack of experience. Sometimes you need warriors and leaders around you.

“We don’t have a big staff, so having Stu around and amongst the boys is first class.”