Goalkeeper Ashley Maynard-Brewer chats to the club website for the first time since signing on a season-long loan from Charlton Athletic.

Australian U23 international excited at the challenge that lies ahead at Priestfield.

Ashley Maynard-Brewer moved from Dunstable to Down Under a few months after his birth when his father secured a mining job in Sydney. 16 years later his determination to make his name in England saw him return back to the UK.

Australia have a rich heritage of impressive goalkeepers who have made their name in England. Stars like Mark Bosnich, Matt Ryan, Brad Jones and Mark Schwarzer have all shone at the very highest level over the years.

The road may be long but Maynard-Brewer, who has won three caps for the U23 Australian national side and was part of the Olyroos Tokyo Olympics 2020 team, is determined to follow in their footsteps.

The Charlton stopper, 23, has now penned a season-long deal at Gillingham and is clearly focused on making the most of the opportunity.

“I’m excited,” admitted Maynard-Brewer, who got 45 minutes under his belt in the recent 2-0 friendly win against Folkstone Invicta. “I feel like I have settled in pretty quickly. My first training session was last Monday so I have had just over a week now. The group is very easy going and welcoming. I know Deren Ibrahim, the Gills goalie coach, from my time at Charlton and I feel like I have a strong rapport with him. We have hit the ground running pretty quickly.

“He came to Charlton when I was in my third year there, when I was about 18 or 19. I trained with him for a number of years until he moved to West Ham. He has helped me out during an important time in my career so I am really looking forward to working with him again.

“It’s not just the training and helping with games, he has organised a few loans too. He not only helped me on the pitch but he helped me off it, settling me in to England after moving here from Australia.

“When Deren called me in the off-season talking about the challenge of coming here, I spoke to the manager and I have to say, I’m excited and really looking forward to it.”

No sooner had Gills manager Neil Harris brought in Maynard-Brewer he quickly followed it up with the capture of Newcastle stopper Jake Turner, also 23. Jake has youth international experience for England at U18 and U19 level and looks a good prospect to challenge Ash for a starting spot. 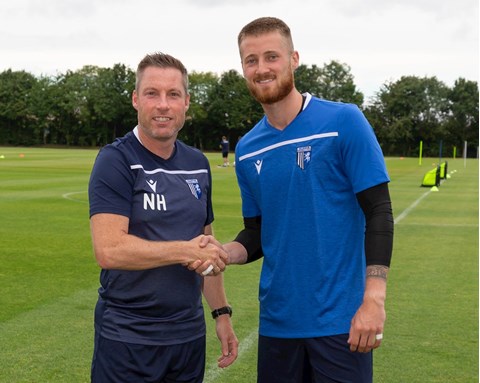 “Jake seems like a really nice guy,” said Maynard-Brewer. “We are both a similar age and have had a similar upbringing in football. He’s a good goalie and I’m looking forward to working with him this season.”

The two will be put through their paces in pre-season by Deren who will be tasked with pushing both of them to reach their potential ahead of a big season at ME7.

“Pre-season is so important for a goalkeeper,” said Maynard-Brewer. “Getting into those game situations and having that game understanding with your back four is so crucial. Hopefully the friendly matches and pre-season will put me in good stead.

“I’ve been on the bench once or twice with Charlton at Priestfield and I remember there was a good atmosphere and a really good feel to the place. I just want to get going.”