Gills boss Steve Evans conceded that his team didn’t deserve anything from Monday’s game at Blackpool, but the hurt of the disappointment will now be channelled into positivity ahead of Saturday’s home match against Shrewsbury.

Jordan Graham had equalized at Bloomfield Road following an early goal from Jerry Yates, but the Seasiders scored three more without reply to claim the points in a 4-1 win. Gills have fallen a place in the table but are still very much in the play-off mix, however the manager knows that this weekend’s game is a big one in the context of the season. 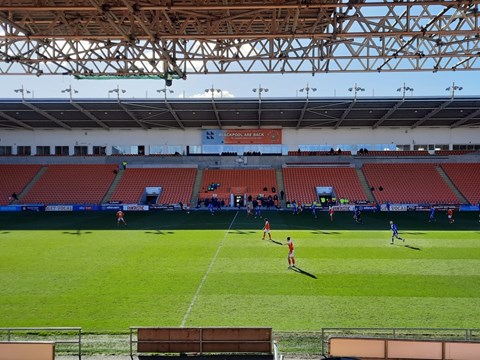 Speaking after the game he said: "We didn’t produce the type of performance that we’ve done probably since mid-January. We were well beaten, there are no excuses. In the first 20 minutes we started well, then conceded two poor goals. One is a bit of a ricochet in the middle of the park which their striker gets on to and scores.

"We miss a couple of chances to equalize, we get the goal through Jordan Graham. I don’t think it’s a free-kick on the wide touchline but the referee had a good performance. We don't defend the free-kick right, they score. The third goal is well worked from their point of view, probably their best goal of the game and it’s a great finish.

"There is then a pivotal moment, a couple of minutes before half-time Stuart O'Keefe bursts into the box, has a tremendous strike and it's a brilliant save. It’s 3-1 at half-time; the conversation is about whether we get the next goal, or Blackpool.

“They did. They were better than us. We will take the pain all the way back to Kent. We deserved to get nothing today, and we got nothing."

The manager immediately switched focus to this weekend’s game, and said positivity is the order of the day if his team are to maintain their charge for a play-off position.

He added: “I’m not here to criticise my players; it’s been a bad day for us today.

“If ever there was a case we missed Robbie Cundy, it was today. We move on, we take the pain of losing and we’ll see what we can do against Shrewsbury on Saturday; it becomes an even bigger game than this one because we simply have to win some games now.

“Teams have games in hand, but the pressure is different now. We need to try and beat Shrewsbury. We are four points off the play-offs; did we get everything right today? No.

“We will channel the hurt into positivity. If we beat Shrewsbury we could be a point or two off them with five to go.

“We have never allowed the training ground to be a place that gets too high and we’ve never allowed it to get too low when it’s gone against us. What you have to do is put some calm thoughts behind it.”