Gills Assistant Manager Paul Raynor said Tuesday's friendly against Millwall was "a good workout" and was pleased with the overall team performance.

Kyle Dempsey opened the scoring on 14 minutes and Gills were within touching distance of victory, only for Jake Cooper to come off the bench and head home in the closing stages to make the final score 1-1. 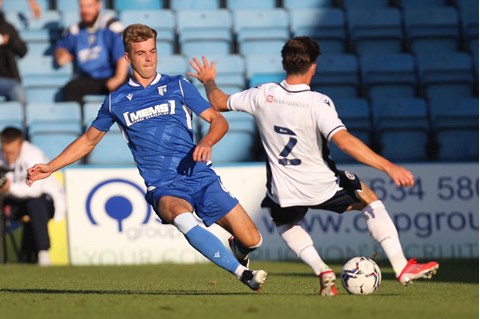 Speaking after the game, Raynor said: "Very satisfied; Millwall are an established Championship side with some very good players. Really pleased; a good first half performance. On the whole a really good workout for us.

"Pre-season is about getting game time into the guys and getting positive performances.

"There were some really good performances; we had a bit of a slow start but once we started jumping on some second balls we established ourselves in the game and deserved the lead at half-time.

"Unfortunately we switched off and conceded the goal.

"It was a proper Football match; it was an aggressive physical game and it's what they needed, and exactly what we needed."

The Assistant Manager praised the squad, and staff, for their hard work over the last seven days and is hopeful the likes of Robbie McKenzie and Ryan Jackson will be back soon.

He added: "We will tweak it again Saturday [at Leyton Orient]; we are conscious of the game time but I thought the boys, physically, looked great.

"Rob McKenzie is still working very hard to get fit; Ryan tweaked his hamstring at Colchester and hopefully won't be out for too long. We can't take chances; we are light on numbers.

"The Gaffer is working extremely hard [to get a couple more in], so we will wait and see. Watch this space as they say.

"James Russell and the medical team are brilliant, really good at their jobs. They are up for the workload and we have, perhaps, worked a bit harder this week than we would before a game but the lads have done what we asked, and I thought the fitness levels were excellent."

There were a few trialists on show and Raynor said the management will have a closer look before making any decisions.

"Usually it's ones we know of and looked at over the years; they are selective, we know them and we'll see."

Finally, Rayns was delighted to see the supporters back in the stadium and is looking forward to hearing them on a more regular basis.

He added: "It's great to have the fans back, that was absolutely brilliant. I'm sure they have enjoyed coming back to Priestfield and we've enjoyed having them back.

"We said all last season we missed them; they clapped us off, they were singing and we really enjoyed having them."